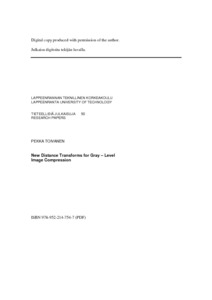 Both distance transforms, the DTOCS and EDTOCS, require only two passes over the graylevel image and are extremely simple to implement. Only two image buffers are needed: The original gray level image and the binary image which defines the region(s) of calculation. No other image buffers are needed even if more than one iteration round is performed. For large neighborhoods and complicated images the two pass distance algorithm has to be applied to the image more than once, typically 3 10 times. Different types of kernels can be adopted. It is important to notice that no other existing transform calculates the same kind of distance map as the DTOCS. All the other gray weighted distance function, GRAYMAT etc. algorithms find the minimum path joining two points by the smallest sum of gray levels or weighting the distance values directly by the gray levels in some manner. The DTOCS does not weight them that way. The DTOCS gives a weighted version of the chessboard distance map. The weights are not constant, but gray value differences of the original image. The difference between the DTOCS map and other distance transforms for gray level images is shown. The difference between the DTOCS and EDTOCS is that the EDTOCS calculates these gray level differences in a different way. It propagates local Euclidean distances inside a kernel. Analytical derivations of some results concerning the DTOCS and the EDTOCS are presented.

Commonly distance transforms are used for feature extraction in pattern recognition and learning. Their use in image compression is very rare. This thesis introduces a new application area for distance transforms. Three new image compression algorithms based on the DTOCS and one based on the EDTOCS are presented. Control points, i.e. points that are considered fundamental for the reconstruction of the image, are selected from the gray level image using the DTOCS and the EDTOCS. The first group of methods select the maximas of the distance image to new control points and the second group of methods compare the DTOCS distance to binary image chessboard distance. The effect of applying threshold masks of different sizes along the threshold boundaries is studied. The time complexity of the compression algorithms is analyzed both analytically and experimentally. It is shown that the time complexity of the algorithms is independent of the number of control points, i.e. the compression ratio. Also a new morphological image decompression scheme is presented, the 8 kernels' method.
Several decompressed images are presented. The best results are obtained using the Delaunay triangulation. The obtained image quality equals that of the DCT images with a 4 x 4