Development a distributed simulation environment on a cluster of workstations 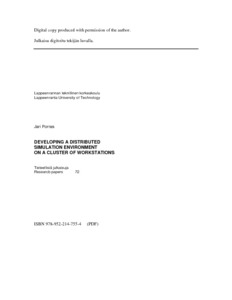 A new technique for considering the simulation application is also presented. The performance is improved by establishing a neighborhood for the simulation elements. The neighborhood concept is based on a channel reduction technique, where the properties of the application exclusively determine which connections are necessary when a certain accuracy for simulation results is required.

Distributed simulation is also analyzed in order to find out the effect of the different elements in the implemented simulation environment. This analysis is performed by using critical path analysis. Critical path analysis allows determination of a lower bound for the simulation time. In this thesis critical times are computed for sequential and parallel traces. The analysis based on sequential traces reveals the parallel properties of the application whereas the analysis based on parallel traces reveals the properties of the environment and the distribution.