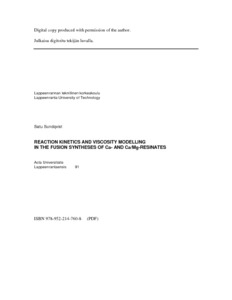 Rosin is a natural product from pine forests and it is used as a raw material in resinate syntheses. Resinates are polyvalent metal salts of rosin acids and especially Ca- and Ca/Mg- resinates find wide application in the printing ink industry. In this thesis, analytical methods were applied to increase general knowledge of resinate chemistry and the reaction kinetics was studied in order to model the non linear solution viscosity increase during resinate syntheses by the fusion method.
Solution viscosity in toluene is an important quality factor for resinates to be used in printing inks. The concept of critical resinate concentration, c crit, was introduced to define an abrupt change in viscosity dependence on resinate concentration in the solution. The concept was then used to explain the non-inear solution viscosity increase during resinate syntheses. A semi empirical model with two estimated parameters was derived for the viscosity increase on the basis of apparent reaction kinetics. The model was used to control the viscosity and to predict the total reaction time of the resinate process.
The kinetic data from the complex reaction media was obtained by acid value titration and by FTIR spectroscopic analyses using a conventional calibration method to measure the resinate concentration and the concentration of free rosin acids. A multivariate calibration method was successfully applied to make partial least square (PLS) models for monitoring acid value and solution viscosity in both mid-infrared (MIR) and near infrared (NIR) regions during the syntheses. The calibration models can be used for on line resinate process monitoring.
In kinetic studies, two main reaction steps were observed during the syntheses. First a fast irreversible resination reaction occurs at 235 °C and then a slow thermal decarboxylation of rosin acids starts to take place at 265 °C. Rosin oil is formed during the decarboxylation reaction step causing significant mass loss as the rosin oil evaporates from the system while the viscosity increases to the target level. The mass balance of the syntheses was determined based on the resinate concentration increase during the decarboxylation reaction step.
A mechanistic study of the decarboxylation reaction was based on the observation that resinate molecules are partly solvated by rosin acids during the syntheses. Different decarboxylation mechanisms were proposed for the free and solvating rosin acids. The deduced kinetic model supported the analytical data of the syntheses in a wide resinate concentration region, over a wide range of viscosity values and at different reaction temperatures. In addition, the application of the kinetic model to the modified resinate syntheses gave a good fit.
A novel synthesis method with the addition of decarboxylated rosin (i.e. rosin oil) to the reaction mixture was introduced. The conversion of rosin acid to resinate was increased to the level necessary to obtain the target viscosity for the product at 235 °C. Due to a lower reaction temperature than in traditional fusion synthesis at 265 °C, thermal decarboxylation is avoided. As a consequence, the mass yield of the resinate syntheses can be increased from ca. 70% to almost 100% by recycling the added rosin oil.