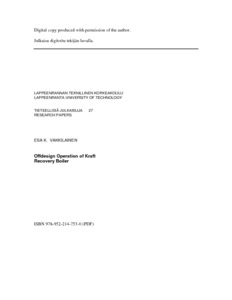 A model to solve heat and mass balances during the offdesign load calculations was created. These equations are complex and nonlinear. The main new ideas used in the created offdesign model of a kraft recovery boiler are the use of heat flows as torn iteration variables instead of the current practice of using the mass flows, vectorizing equation solving, thus speeding up the process, using non dimensional variables for solving the multiple heat transfer surface problem and using a new procedure for calculating pressure losses. Recovery boiler heat and mass balances are reduced to vector form. It is shown that these vectorized equations can be solved virtually without iteration. The iteration speed is enhanced by the use of the derived method of calculating multiple heat transfer surfaces simultaneously. To achieve this quick convergence the heat flows were used as the torn iteration parameters. A new method to handle pressure loss calculations with linearization was presented. This method enabled less time to be spent calculating pressure losses. The derived vector representation of the steam generator was used to calculate offdesign operation parameters for a 3000 tds/d example recovery boiler. The model was used to study recovery boiler part load operation and the effect of the black liquor dry solids increase on recovery boiler dimensioning. Heat flows to surface elements for part load calculations can be closely approximated with a previously defined exponent function. The exponential method can be used for the prediction of fouling in kraft recovery boilers. For similar furnaces the firing of 80 % dry solids liquor produces lower hearth heat release rate than the 65 % dry solids liquor if we fire at constant steam flow. The furnace outlet temperatures show that capacity increase with firing rate increase produces higher loadings than capacity increase with dry solids increase. The economizers, boiler banks and furnaces can be dimensioned smaller if we increase the black liquor dry solids content. The main problem with increased black liquor dry solids content is the decrease in the heat available to superheat. Whenever possible the furnace exit temperature should be increased by decreasing the furnace height. The increase in the furnace exit temperature is usually opposed because of fear of increased corrosion.