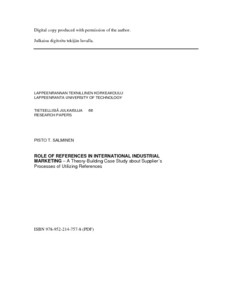 Due to the explorative nature of the study, a research design was followed where theory and empirical studies alternated. An Exploratory Framework was developed to guide a pilot case study that resulted in Framework 1. Results of the pilot study guided an expanded literature review that was used to develop first a Structural Framework and a Process Framework which were combined in Framework 2. Then, the second empirical phase of the case study was conducted in the same (pilot) case company. In this phase, Decision Systems Analysis (DSA) was used as the analysis method. The DSA procedure consists of three interviewing waves: initial interviews, reinterviews, and validating interviews. Four reference decision processes were identified, described and analyzed in the form of flowchart descriptions. The flowchart descriptions were used to explore new constructs and to develop new propositions to develop Framework 2 further.

The quality of the study was ascertained by many actions in both empirical parts of the study. The construct validity of the study was ascertained by using multiple sources of evidence and by asking the key informant to review the pilot case report. The DSA method itself includes procedures assuring validity. Because of the choice to conduct a single case study, external validity was not even pursued. High reliability was pursued through detailed documentation and thorough reporting of evidence.

It was concluded that the core of the concept of reference is a customer relationship regardless of the concrete forms a reference might take in its utilization. Depending on various contingencies, references might have various tasks inside the four roles of increasing 1) efficiency of sales and sales management, 2) efficiency of the business, 3) effectiveness of marketing activities, and 4) effectiveness in establishing, maintaining and enhancing customer relationships. Thus, references have not only external but internal tasks as well.

A supplier's reference behavior might be affected by many hierarchical conditions. Additionally, the empirical study showed that the supplier can utilize its references as a continuous, all pervasive decision making process through various practices. The process includes both individual and unstructured decision making subprocesses. The proposed concept of reference can be used to guide a reference policy recommendable for companies for which the utilization of references is important.

The significance of the study is threefold: proposing the concept of reference, developing a framework of a supplier's reference behavior and its short term process of utilizing references, and conceptual structuring of an unstructured and in industrial marketing important phenomenon to four roles.