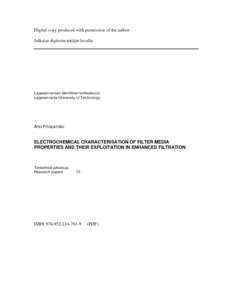 Streaming potential measurements for the surface charge characterisation of different filter media types and materials were used. The equipment was developed further so that measurements could be taken along the surfaces, and so that tubular membranes could also be measured. The streaming potential proved to be a very useful tool in the charge analysis of both clean and fouled filter media. Adsorption and fouling could be studied, as could flux, as functions of time. A module to determine the membrane potential was also constructed. The results collected from the experiments conducted with these devices were used in the study of the theory of streaming potential as an electrokinetic phenomenon. Several correction factors, which are derived to take into account the surface conductance and the electrokinetic flow in very narrow capillaries, were tested in practice.

The surface materials were studied using FTIR and the results compared with those from the streaming potentials. FTIR analysis was also found to be a useful tool in the characterisation of filters, as well as in the fouling studies. Upon examination of the recorded spectra from different depths in a sample it was possible to determine the adsorption sites.

The influence of an external electric field on the cross flow microflltration of a binary protein system was investigated using a membrane electroflltration apparatus. The results showed that a significant improvement could be achieved in membrane filtration by using the measured electrochemical properties to help adjust the process conditions.