Electroluminescence of silicon- and some metal oxides 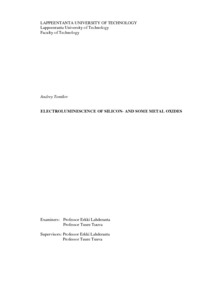 In the present work electroluminescence in Si-SiO2 structures has been investigated. Electroluminescence has been recorded in the range of 250-900 nm in a system of electrolyte-insulator-semiconductor at the room temperature. The heating process of electrons in SiO2 was studied and possibility of separation it into two phases has been shown. The nature of luminescence centers and the model of its formation were proposed. This paper also includes consideration of oxide layer formation. Charge transfer mechanisms have been attended as well. The nature of electroluminescence is understood in detail. As a matter of fact, electron traps in silicon are the centers of luminescence. Electroluminescence occurs when electrons move from one trap to another. Thus the radiation of light quantum occurs. These traps appear as a result of the oxide growth. At the same time the bonds deformation of silicon atoms with SiOH groups is not excludes. As a result, dangling bonds are appeared, which are the trapping centers or the centers of luminescence.