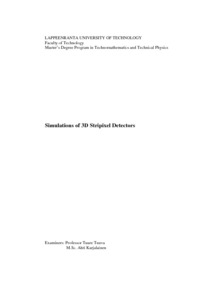 Large Hadron Collider (LHC) is the main particle accelerator at CERN. LHC is created with main goal to search elementary particles and help science investigate our universe. Radiation in LHC is caused by charged particles circular acceleration, therefore detectors tracing particles in existed severe conditions during the experiments must be radiation tolerant. Moreover, further upgrade of luminosity (up to 1035 cm-2s-1) requires development of particle detector’s structure.
This work is dedicated to show the new type 3D stripixel detector with serious structural improvement. The new type of radiation-hard detector has a three-dimensional (3D) array of the p+ and n+ electrodes that penetrate into the detector bulk. The electrons and holes are then collected at oppositely biased electrodes.
Proposed 3D stripixel detector demonstrates that full depletion voltage is lower that that for planar detectors. Low depletion voltage is one of the main advantages because only depleted part of the device is active are. Because of small spacing between electrodes, charge collection distances are smaller which results in high speed of the detector’s response.
In this work is also briefly discussed dual-column type detectors, meaning consisting both n+ and p+ type columnar electrodes in its structure, and was declared that dual-column detectors show better electric filed distribution then single sided radiation detectors. The dead space or in other words low electric field region in significantly suppressed. Simulations were carried out by using Atlas device simulation software. As a simulation results in this work are represented the electric field distribution under different bias voltages.