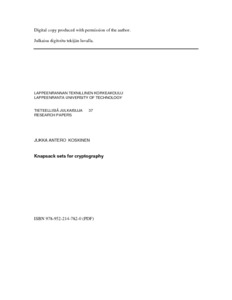 The basic goal of this study is to extend old and propose new ways to generate knapsack sets suitable for use in public key cryptography. The knapsack problem and its cryptographic use are reviewed in the introductory chapter. Terminology is based on common cryptographic vocabulary. For example, solving the knapsack problem (which is here a subset sum problem) is termed decipherment.
Chapter 1 also reviews the most famous knapsack cryptosystem, the Merkle Hellman system. It is based on a superincreasing knapsack and uses modular multiplication as a trapdoor transformation. The insecurity caused by these two properties exemplifies the two general categories of attacks against knapsack systems. These categories provide the motivation for Chapters 2 and 4. Chapter 2 discusses the density of a knapsack and the dangers of having a low density.
Chapter 3 interrupts for a while the more abstract treatment by showing examples of small injective knapsacks and extrapolating conjectures on some characteristics of knapsacks of larger size, especially their density and number.
The most common trapdoor technique, modular multiplication, is likely to cause insecurity, but as argued in Chapter 4, it is difficult to find any other simple trapdoor techniques. This discussion also provides a basis for the introduction of various categories of non injectivity in Chapter 5.
Besides general ideas of non injectivity of knapsack systems, Chapter 5 introduces and evaluates several ways to construct such systems, most notably the "exceptional blocks" in superincreasing knapsacks and the usage of "too small" a modulus in the modular multiplication as a trapdoor technique.
The author believes that non injectivity is the most promising direction for development of knapsack cryptosystema.
Chapter 6 modifies two well known knapsack schemes, the Merkle Hellman multiplicative trapdoor knapsack and the Graham Shamir knapsack. The main interest is in aspects other than non injectivity, although that is also exploited. In the end of the chapter, constructions proposed by Desmedt et. al. are presented to serve as a comparison for the developments of the subsequent three chapters.
Chapter 7 provides a general framework for the iterative construction of injective knapsacks from smaller knapsacks, together with a simple example, the "three elements" system. In Chapters 8 and 9 the general framework is put into practice in two different ways.
Modularly injective small knapsacks are used in Chapter 9 to construct a large knapsack, which is called the congruential knapsack. The addends of a subset sum can be found by decrementing the sum iteratively by using each of the small knapsacks and their moduli in turn. The construction is also generalized to the non injective case, which can lead to especially good results in the density, without complicating the deciphering process too much.
Chapter 9 presents three related ways to realize the general framework of Chapter 7. The main idea is to join iteratively small knapsacks, each element of which would satisfy the superincreasing condition. As a whole, none of these systems need become superincreasing, though the development of density is not better than that. The new knapsack systems are injective but they can be deciphered with the same searching method as the non injective knapsacks with the "exceptional blocks" in Chapter 5.
The final Chapter 10 first reviews the Chor Rivest knapsack system, which has withstood all cryptanalytic attacks. A couple of modifications to the use of this system are presented in order to further increase the security or make the construction easier. The latter goal is attempted by reducing the size of the Chor Rivest knapsack embedded in the modified system. '