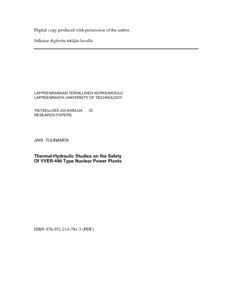 This thesis includes several thermal hydraulic analyses related to the Loviisa WER 440 nuclear power plant units. The work consists of experimental studies, analysis of the experiments, analysis of some plant transits and development of a calculational model for calculation of boric acid concentrations in the reactor.

In the first part of the thesis, in the case of won of boric acid solution behaviour during long term cooling period of LOCAs, experiments were performed in scaled down test facilities. The experimental data together with the results of RELAPS/MOD3 simulations were used to develop a model for calculations of boric acid concentrations in the reactor during LOCAs. The results of calculations showed that margins to critical concentrations that would lead to boric acid crystallization were large, both in the reactor core and in the lower plenum. This was mainly caused by the fact that water in the primary cooling circuit includes borax (Na)BsO,.IOHZO), which enters the reactor when ECC water is taken from the sump and greatly increases boric acid solubility in water.

In the second part, in the case of simulation of horizontal steam generators, experiments were performed with PACTEL integral test loop to simulate loss of feedwater transients. The PACTEL experiments, as well as earlier REWET III natural circulation tests, were analyzed with RELAPS/MOD3 Version Sm5 code. The analysis showed that the code was capable of simulating the main events during the experiments. However, in the case of loss of secondary side feedwater the code was not completely capable to simulate steam superheating in the secondary side of the steam generators.

The third part of the work consists of simulations of Loviisa VVER reactor pump trip transients with RELAPSlMODI Eur, RELAPS/MOD3 and CATHARE codes. All three codes were capable to simulate the two selected pump trip transients and no significant differences were found between the results of different codes. Comparison of the calculated results with the data measured in the Loviisa plant also showed good agreement.