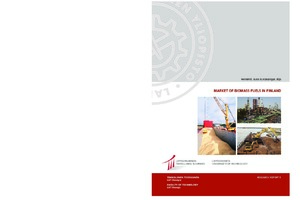 This study considered the current situation of solid and liquid biomass fuels in Finland. The fact that industry consumes more than half of the total primary energy, widely applied combined heat and power production and a high share of solid biomass fuels in the total energy consumption are specific to the Finnish energy system. Wood is the most important source of bioenergy in Finland, representing 20% of the total energy consumption in 2007. Almost 80% of the woodbased energy is recovered from industrial by-products and residues.
As a member of the European Union, Finland has committed itself to the Union’s climate and energy targets, such as reducing its overall emissions of green house gases to at least 20% below 1990 levels by 2020, and increasing the share of renewable energy in the gross final consumption. The renewable energy target approved for Finland is 38%. The present National Climate and Energy Strategy was introduced in November 2008. The strategy covers climate and energy policy measures up to 2020, and in brief thereafter, up to 2050. In recent years, the actual emissions have exceeded the Kyoto commitment and the trend of emissions is on the increase. In 2007, the share of renewable energy in the gross final energy consumption was approximately 25% (360 PJ). Without new energy policy measures, the final consumption of renewable energy would increase to 380 PJ, which would be approximately only 31% of the final energy consumption. In addition, green house gas emissions would exceed the 1990 levels by 20%. Meeting the targets will need the adoption of more active energy policy measures in coming years.
The international trade of biomass fuels has a substantial importance for the utilisation of bioenergy in Finland. In 2007, the total international trading of solid and liquid biomass fuels was approximately 77 PJ, of which import was 62 PJ. Most of the import is indirect and takes place within the forest industry’s raw wood imports. In 2007, as much as 21% of wood energy was based on foreign-origin wood. Wood pellets and tall oil form the majority of export streams of biomass fuels. The indirect import of wood fuels peaked in 2006 to 61 PJ. The foreseeable decline in raw wood import to Finland will decrease the indirect import of wood fuels. In 2004– 2007, the direct trade of solid and liquid biomass fuels has been on a moderate growth path. In 2007, the import of palm oil and export of bio-diesel emerged, as a large, 170 000 t/yr biodiesel plant came into operation in Porvoo.