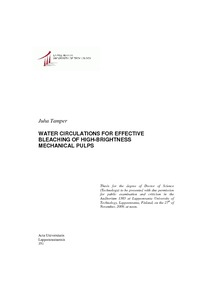 It was shown that with optimum recirculation of residual peroxide the brightness can be improved or chemical costs can be decreased. From the scientific perspective, it was also very important to discover that recycled peroxide was more effective pre-bleaching agent compared to fresh peroxide. This can be due to the organic acids i.e. per acetic acid in wash press filtrate that have been formed in alkaline bleaching stage. Even short retention time was adequate and the activation of residual peroxide using sodium hydroxide was not necessary.

There are several possibilities for using residual peroxide in practice regarding bleaching. A typical modern mechanical pulping process line consist of defibering, screening, a disc filter, a bleach press, high consistency (HC) peroxide bleaching and a wash press. Furthermore there usually is not a particular medium consistency (MC) pre-bleaching stage that includes additional thickening equipment. The most advisable way to utilize residual peroxide in this kind of process is to recycle the wash press filtrate to the dilution of disc filter pulp (low MC pre-bleaching stage). An arrangement such as this would be beneficial in terms of the reduced convection of manganese to the alkaline bleaching stage. Manganese originates from wood material and will be removed to the water phase already in the early stages of the process. Recycling residual peroxide prior to the disc filter is not recommended because of low consistencies. Regarding water circulations, the novel point of view is that, it would be beneficial to divide water circulations into two sections and the critical location for the division is the disc filter. Both of these two sections have their own priority. Section one before the disc filter: manganese removal. Section two after the disc filter: brightening of pulp.

This division can be carried out if the disc filter pulp is diluted only by wash press filtrate before the MC storage tower. The situation is even better if there is an additional press after the disc filter, which will improve the consistency of the pulp. This has a significant effect on the peroxide concentration in the MC pre-bleaching stage. In terms of manganese content, it is essential to avoid the use of disc filter filtrate in the bleach press and wash press showers. An additional cut-off press would also be beneficial for manganese removal.

As a combination of higher initial brightness and lower manganese content, the typical brightness increase varies between approximately 0.5 and 1% ISO units after the alkaline peroxide bleaching stage. This improvement does not seem to be remarkable, but as it is generally known, the final brightness unit is the most expensive and difficult to achieve. The estimation of cost savings is not unambiguous. For example in GW/TMP mill case 0.6% ISO units higher final brightness gave 10% savings in the costs of bleaching chemicals. With an hypothetical 200 000 ton annual production, this means that the mill could save in the costs of bleaching chemicals more than 400 000 euros per year.

In general, it can be said that there were no differences between the behavior of different types of processes (GW, PGW, TMP and BCTMP). The enhancement of recycling gave a similar response in all cases. However, we have to remember that the utilization of residual peroxide in older mills depends a great deal on the process equipment, the amount of water available and existing pipeline connections. In summary, it can be said that processes are individual and the same solutions cannot be applied to all cases.