The effect of pulp washing on bleaching efficiency 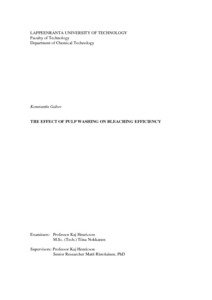 The main aim of this study was to inspect the influence of the ultrafiltration implementation on the washing and on bleaching efficiency. Four cases corresponding to four washing stages were observed: two with hardwood pulp and two with softwood pulp; each case had a reference and a trial experiment.
The experiments with hardwood pulp were arranged in a manner to explore predominantly the possibility of bleaching performance improvement by applying for washing instead of untreated filtrate (reference case) the same treated one (trial case). Despite that the ultrafiltration reduced the COD of the wash filtrates allowing the decreasing of COD carry-over to the bleaching stage it didn’t affect the bleaching performance.
Another set was used in the experiments with softwood pulp. It implied the ultrafiltration and recirculation of the filtrate to the same washing stage with the purpose to reduce the volumes and pollution of the bleaching effluents. In one case the negative result was obtained which was expressed by worse parameters of the pulp after bleaching. Another case showed the opportunity to replace hot water with the filtrate and reduce the fresh water consumption.