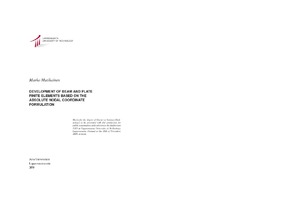 The improvements of the formulation are mainly concentrated towards the description of transverse shear deformation. Additionally, the formulation is verified by using conventional iso-parametric solid finite element and geometrically exact beam theory. Previous claims about especially high eigenfrequencies are studied by introducing beam elements based on the absolute nodal coordinate formulation in the framework of the large rotation vector approach. Additionally, the same high eigenfrequency problem is studied by using constraints for transverse deformation.

It was determined that the improvements for shear deformation in the transverse direction lead to clear improvements in computational efficiency. This was especially true when comparative stress must be defined, for example when using elasto-plastic material. Furthermore, the developed plate element can be used to avoid certain numerical problems, such as shear and curvature lockings. In addition, it was shown that when compared to conventional solid elements, or elements based on nonlinear beam theory, elements based on the absolute nodal coordinate formulation do not lead to an especially stiff system for the equations of motion.