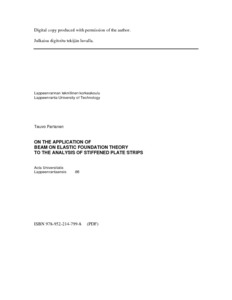 The main objective of this thesis is to show that plate strips subjected to transverse line loads can be analysed by using the beam on elastic foundation (BEF) approach. It is shown that the elastic behaviour of both the centre line section of a semi infinite plate supported along two edges, and the free edge of a cantilever plate strip can be accurately predicted by calculations based on the two parameter BEF theory. The transverse bending stiffness of the plate strip forms the foundation. The foundation modulus is shown, mathematically and physically, to be the zero order term of the fourth order differential equation governing the behaviour of BEF, whereas the torsion rigidity of the plate acts like pre tension in the second order term.

Direct equivalence is obtained for harmonic line loading by comparing the differential equations of Levy's method (a simply supported plate) with the BEF method. By equating the second and zero order terms of the semi infinite BEF model for each harmonic component, two parameters are obtained for a simply supported plate of width B: the characteristic length, 1/ λ, and the normalized sum, n, being the effect of axial loading and stiffening resulting from the torsion stiffness, nlin. This procedure gives the following result for the first mode when a uniaxial stress field was assumed (ν = 0): 1/λ = √2B/π and nlin = 1.

For constant line loading, which is the superimposition of harmonic components, slightly differing foundation parameters are obtained when the maximum deflection and bending moment values of the theoretical plate, with v = 0, and BEF analysis solutions are equated: 1 /λ= 1.47B/π and nlin. = 0.59 for a simply supported plate; and 1/λ = 0.99B/π and nlin = 0.25 for a fixed plate. The BEF parameters of the plate strip with a free edge are determined based solely on finite element analysis (FEA) results: 1/λ = 1.29B/π and nlin. = 0.65, where B is the double width of the cantilever plate strip.
The stress biaxial, v > 0, is shown not to affect the values of the BEF parameters significantly the result of the geometric nonlinearity caused by in plane, axial and biaxial loading is studied theoretically by comparing the differential equations of Levy's method with the BEF approach. The BEF model is generalised to take into account the elastic rotation stiffness of the longitudinal edges. Finally, formulae are presented that take into account the effect of Poisson's ratio, and geometric non linearity, on bending behaviour resulting from axial and transverse inplane loading. It is also shown that the BEF parameters of the semi infinite model are valid for linear elastic analysis of a plate strip of finite length. The BEF model was verified by applying it to the analysis of bending stresses caused by misalignments in a laboratory test panel.
In summary, it can be concluded that the advantages of the BEF theory are that it is a simple tool, and that it is accurate enough for specific stress analysis of semi infinite and finite plate bending problems.