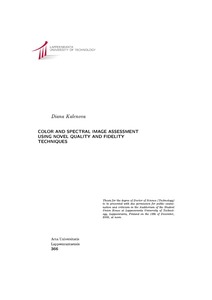 The ongoing development of the digital media has brought a new set of challenges with it. As images containing more than three wavelength bands, often called spectral images, are becoming a more integral part of everyday life, problems in the quality of the RGB reproduction from the spectral images have turned into an important area of research. The notion of image quality is often thought to comprise two distinctive areas – image quality itself and image fidelity, both dealing with similar questions, image quality being the degree of excellence of the image, and image fidelity the measure of the match of the image under study to the original.

In this thesis, both image fidelity and image quality are considered, with an emphasis on the influence of color and spectral image features on both. There are very few works dedicated to the quality and fidelity of spectral images. Several novel image fidelity measures were developed in this study, which include kernel similarity measures and 3D-SSIM (structural similarity index). The kernel measures incorporate the polynomial, Gaussian radial basis function (RBF) and sigmoid kernels. The 3D-SSIM is an extension of a traditional gray-scale SSIM measure developed to incorporate spectral data. The novel image quality model presented in this study is based on the assumption that the statistical parameters of the spectra of an image influence the overall appearance. The spectral image quality model comprises three parameters of quality: colorfulness, vividness and naturalness. The quality prediction is done by modeling the preference function expressed in JNDs (just noticeable difference). Both image fidelity measures and the image quality model have proven to be effective in the respective experiments.