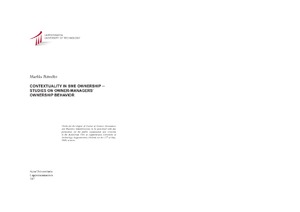 The purpose of this study is to deepen the understanding of the meaning of ownership in the context of small and medium sized businesses. The research on ownership has increased and widened during the last few years. Ownership is treated increasingly as a psychological phenomenon and it has been noticed that it is common for SME ownermanagers to be mentally linked to their firms. Previous research is suggesting that the central role of an owner-manager in an SME is specifying the concept of SMEs, and that ownership is creating a great heterogeneity within SMEs. This study suggests that there is a variation whitin ownership behaviour of small business owners, and the variation is not totally random or irrational, but following the general patterns of business ownership and of doing business on an SME level.

This study is a concept analytical in nature and it builds on the theoretical clarification of the concept of ownership. The theoretical consideration concludes with proposing a definition of ownership: Ownership means a subject’s relatively sustaining position of control in regard to an object. The empirical part of this study consists of five articles, out of which one is conceptual and four are empirical in nature. The notion of contextuality of ownership and the notions of SME characteristics form the basic premise of this study and the theoretical basis for the publications.

From the owner-managers point of view, ownership relates the owner also to his or her environment and therefore also to the valuations of the owner-managers. This means that all the dimensions are not equally valued, but certain dimensions in his or her ownership are more important. The presented empirical research is supporting the claim that there is a variation whitin ownership behaviour of small business owners. When bringing the definition of ownership onto a personal and psychological level and into the SME context, it was noticed that ownership is not only a closed system phenomenon occurring between the owner and object owned, but it is also elementarily connected to the environment. Ownership - along with the psychological side of it - is a contextual phenomenon where the fundamental factor is the relatively sustaining position of control with regard to an object. As a contribution of the study, this definition is bringing a new point of view to the discussion on SMEs, SME strategic behaviour and family businesses. The study concludes with pointing out directions for future research.