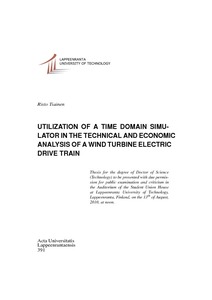 The amount of installed wind power has been growing exponentially during the past ten years. As wind turbines have become a significant source of electrical energy, the interactions between the turbines and the electric power network need to be studied more thoroughly than before. Especially, the behavior of the turbines in fault situations is of prime importance; simply disconnecting all wind turbines from the network during a voltage drop is no longer acceptable, since this would contribute to a total network collapse. These requirements have been a contributor to the increased role of simulations in the study and design of the electric drive train of a wind turbine.

When planning a wind power investment, the selection of the site and the turbine are crucial for the economic feasibility of the installation. Economic feasibility, on the other hand, is the factor that determines whether or not investment in wind power will continue, contributing to green electricity production and reduction of emissions. In the selection of the installation site and the turbine (siting and site matching), the properties of the electric drive train of the planned turbine have so far been generally not been taken into account. Additionally, although the loss minimization of some of the individual components of the drive train has been studied, the drive train as a whole has received less attention. Furthermore, as a wind turbine will typically operate at a power level lower than the nominal most of the time, efficiency analysis in the nominal operating point is not sufficient.

This doctoral dissertation attempts to combine the two aforementioned areas of interest by studying the applicability of time domain simulations in the analysis of the economicfeasibility of a wind turbine. The utilization of a general-purpose time domain simulator, otherwise applied to the study of network interactions and control systems, in the economic analysis of the wind energy conversion system is studied. The main benefits of the simulation-based method over traditional methods based on analytic calculation of losses include the ability to reuse and recombine existing models, the ability to analyze interactions between the components and subsystems in the electric drive train (something which is impossible when considering different subsystems as independent blocks, as is commonly done in theanalytical calculation of efficiencies), the ability to analyze in a rather straightforward manner the effect of selections other than physical components, for example control algorithms, and the ability to verify assumptions of the effects of a particular design change on the efficiency of the whole system.

Based on the work, it can be concluded that differences between two configurations can be seen in the economic performance with only minor modifications to the simulation models used in the network interaction and control method study. This eliminates the need ofdeveloping analytic expressions for losses and enables the study of the system as a whole instead of modeling it as series connection of independent blocks with no lossinterdependencies. Three example cases (site matching, component selection, control principle selection) are provided to illustrate the usage of the approach and analyze its performance.