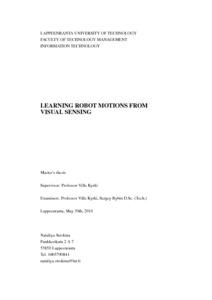 Learning from demonstration becomes increasingly popular as an efficient way of robot programming. Not only a scientific interest acts as an inspiration in this case but also the possibility of producing the machines that would find application in different areas of life: robots helping with daily routine at home, high performance automata in industries or friendly toys for children. One way to teach a robot to fulfill complex tasks is to start with simple training exercises, combining them to form more difficult behavior.

The objective of the Master’s thesis work was to study robot programming with visual input. Dynamic movement primitives (DMPs) were chosen as a tool for motion learning and generation. Assuming a movement to be a spring system influenced by an external force, making this system move, DMPs represent the motion as a set of non-linear differential equations.

During the experiments the properties of DMP, such as temporal and spacial invariance, were examined. The effect of the DMP parameters, including spring coefficient, damping factor, temporal scaling, on the trajectory generated were studied.