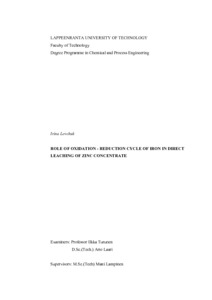 The oxidation-reduction cycle of iron was experimentally studied with goal of gaining new knowledge for developing the direct leaching of zinc concentrate. In order to obtain this aim, ferrous iron oxidation experiments were carried out. Affect of such parameters as temperature, pressure, sulfuric acid concentration, ferrous iron and copper concentrations was studied.

Based on the experimental results, mathematical model of the ferrous iron oxidation rate was developed. According to results obtained during the study, the reaction rate orders for ferrous iron concentration, oxygen concentration and copper concentration are 0.777, 0.652 and 0.0951 respectively. Values predicted by model were in good concordance with the experimental results. The reliability of estimated parameters was evaluated by MCMC analysis which showed good parameters reliability.