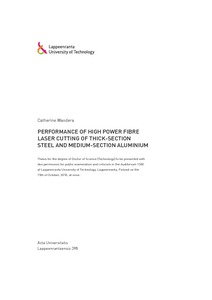 Cutting of thick section stainless steel and mild steel, and medium section aluminium using the high power ytterbium fibre laser has been experimentally investigated in this study. Theoretical models of the laser power requirement for cutting of a metal workpiece and the melt removal rate were also developed.