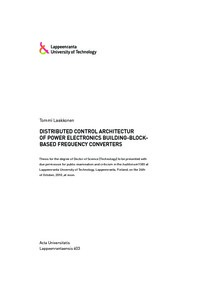 The increasing power demand and emerging applications drive the design of electrical power converters into modularization. Despite the wide use of modularized power stage structures, the control schemes that are used are often traditional, in other words, centralized. The flexibility and re-usability of these controllers are typically poor. With a dedicated distributed control scheme, the flexibility and re-usability of the system parts, building blocks, can be increased. Only a few distributed control schemes have been introduced for this purpose, but their breakthrough has not yet taken place. A demand for the further development offlexible control schemes for building-block-based applications clearly exists.

The control topology, communication, synchronization, and functionality allocationaspects of building-block-based converters are studied in this doctoral thesis. A distributed control scheme that can be easily adapted to building-block-based power converter designs is developed. The example applications are a parallel and series connection of building blocks. The building block that is used in the implementations of both the applications is a commercial off-the-shelf two-level three-phase frequency converter with a custom-designed controller card.

The major challenge with the parallel connection of power stages is the synchronization of the building blocks. The effect of synchronization accuracy on the system performance is studied. The functionality allocation and control scheme design are challenging in the seriesconnected multilevel converters, mainly because of the large number of modules. Various multilevel modulation schemes are analyzed with respect to the implementation, and this information is used to develop a flexible control scheme for modular multilevel inverters.