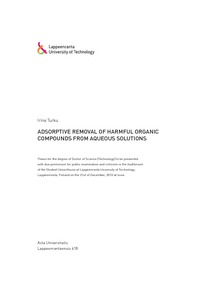 Adsorption is one of the most commonly used methods in water treatment processes. It is attractive due to it easy operation and the availability of a wide variety of commercial adsorbents. This doctoral thesis focuses on investigating and explaining the influence of external phase conditions (temperature, pH, ionic strength, acidity, presence of cosolutes) on adsorption phenomena. In order to cover a wide range of factors and phenomena, case studies were chosen from various fields where adsorption is applied. These include the adsorptive removal of surface active agents (used in cleaning chemicals, for example) from aqueous effluents, the removal of hormones (estradiol) from drinking water, and the adsorption of antibiotics onto silica. The latter can beused to predict the diffusion of antibiotics in the aquatic system if they are released into the environment. Also the adsorption of living cells on functionalized polymers to purify infected water streams was studied.

In addition to these examples, the adsorptive separation of harmful compounds from internal water streams within a chemical process was investigated. The model system was removal of fermentation inhibitors from lignocelluloses hydrolyzates. The detoxification of the fermentation broth is an important step in the manufacture of bioethanol from wood, but has not been studied previously in connection with concentrated acid hydrolyzates.

New knowledge on adsorption phenomena was generated for all of the applications investigated. In most cases, the results could be explained by combining classical theories for individual phenomena. As an example, it was demonstrated how liquid phase aggregation could explain abnormal-looking adsorption equilibrium data.

In addition to the fundamental phenomena, also process performance was of interest. This aspect is often neglected in adsorption studies. It was demonstrated that adsorbents should not be selected for a target application based on their adsorption properties only, but regeneration of the spent adsorbent must be considered. It was found that using a suitable amount of organic co-solvent in the regeneration can significantly improve the productivity of the process.