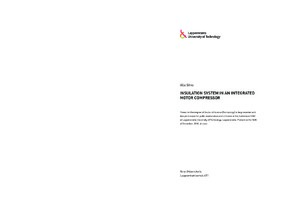 A high-speed and high-voltage solid-rotor induction machine provides beneficial features for natural gas compressor technology. The mechanical robustness of the machine enables its use in an integrated motor-compressor. The technology uses a centrifugal compressor, which is mounted on the same shaft with the high-speed electrical machine driving it. No gearbox is needed as the speed is determined by the frequency converter. The cooling is provided by the process gas, which flows through the motor and is capable of transferring the heat away from the motor. The technology has been used in the compressors in the natural gas supply chain in the central Europe. New areas of application include natural gas compressors working at the wellheads of the subsea gas reservoir. A key challenge for the design of such a motor is the resistance of the stator insulation to the raw natural gas from the well. The gas contains water and heavy hydrocarbon compounds and it is far harsher than the sales gas in the natural gas supply network. The objective of this doctoral thesis is to discuss the resistance of the insulation to the raw natural gas and the phenomena degrading the insulation.

The presence of partial discharges is analyzed in this doctoral dissertation. The breakdown voltage of the gas is measured as a function of pressure and gap distance. The partial discharge activity is measured on small samples representing the windings of the machine. The electrical field behavior is also modeled by finite element methods. Based on the measurements it has been concluded that the discharges are expected to disappear at gas pressures above 4 – 5 bar. The disappearance of discharges is caused by the breakdown strength of the gas, which increases as the pressure increases. Based on the finite element analysis, the physical length of a discharge seen in the PD measurements at atmospheric pressure was approximated to be 40 – 120 m.

The chemical aging of the insulation when exposed to raw natural gas is discussed based on a vast set of experimental tests with the gas mixture representing the real gas mixture at the wellhead. The mixture was created by mixing dry hydrocarbon gas, heavy hydrocarbon compounds, monoethylene glycol, and water. The mixture was chosen to be more aggressive by increasing the amount of liquid substances. Furthermore, the temperature and pressure were increased, which resulted in accelerated test conditions. The time required to detect severe degradation was thus decreased. The test program included a comparison of materials, an analysis of the e ects of di erent compounds in the gas mixture, namely water and heavy hydrocarbons, on the aging, an analysis of the e ects of temperature and exposure duration, and also an analysis on the e ect of sudden pressure changes on the degradation of the insulating materials.

It was found in the tests that an insulation consisting of mica, glass, and epoxy resin can tolerate the raw natural gas, but it experiences some degradation. The key material in the composite insulation is the resin, which largely defines the performance of the insulation system. The degradation of the insulation is mostly determined by the amount of gas mixture di used into it. The di usion was seen to follow Fick’s second law, but the coe cients were not accurately defined. The di usion was not sensitive to temperature, but it was dependent upon the thermodynamic state of the gas mixture, in other words, the amounts of liquid components in the gas. The weight increase observed was mostly related to heavy hydrocarbon compounds, which act as plasticizers in the epoxy resin. The di usion of these compounds is determined by the crosslink density of the resin. Water causes slight changes in the chemical structure, but these changes do not significantly contribute to the aging phenomena. Sudden changes in pressure can lead to severe damages in the insulation, because the motion of the di used gas is able to create internal cracks in the insulation. Therefore, the di usion only reduces the mechanical strength of the insulation, but the ultimate breakdown can potentially be caused by a sudden drop in the pressure of the process gas.