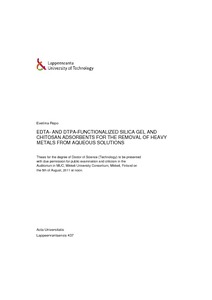 Adsorbents functionalized with chelating agents are effective in removal of heavy metals from aqueous solutions. Important properties of such adsorbents are high binding affinity as well as regenerability. In this study, aminopolycarboxylic acid, EDTA and DTPA, were immobilized on the surface of silica gel, chitosan, and their hybrid materials to achieve chelating adsorbents for heavy metals such as Co(II), Ni(II), Cd(II), and Pb(II).

New knowledge about the adsorption properties of EDTA- and DTPA-functionalizedadsorbents was obtained. Experimental work showed the effectiveness, regenerability, and stability of the studied adsorbents. Both advantages and disadvantages of the adsorbents were evaluated. For example, the EDTA-functionalized chitosan-silica hybrid materials combined the benefits of the silica gel and chitosan while at the same time diminishing their observed drawbacks.

Modeling of adsorption kinetics and isotherms is an important step in design process. Therefore, several kinetic and isotherm models were introduced and applied in this work. Important aspects such as effect of error function, data range, initial guess values, and linearization were discussed and investigated. The selection of the most suitable model was conducted by comparing the experimental and simulated data as well as evaluating the correspondence between the theory behind the model and properties of the adsorbent. In addition, modeling of two-component data was conducted using various extended isotherms. Modeling results for both one- and twocomponent systems supported each other.

Finally, application testing of EDTA- and DTPA-functionalized adsorbents was conducted. The most important result was the applicability of DTPA-functionalized silica gel and chitosan in the capturing of Co(II) from its aqueous EDTA-chelate. Moreover, these adsorbents were efficient in various solution matrices. In addition, separation of Ni(II) from Co(II) and Ni(II) and Pb(II) from Co(II) and Cd(II) was observed in two- and multimetal systems. Lastly, prior to their analysis, EDTA- and DTPA-functionalized silica gels were successfully used to preconcentrate metal ions from both pure and salty waters