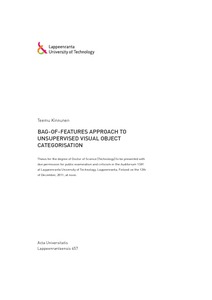 The large and growing number of digital images is making manual image search laborious. Only a fraction of the images contain metadata that can be used to search for a particular type of image. Thus, the main research question of this thesis is whether it is possible to learn visual object categories directly from images. Computers process images as long lists of pixels that do not have a clear connection to high-level semantics which could be used in the image search. There are various methods introduced in the literature to extract low-level image features and also approaches to connect these low-level features with high-level semantics. One of these approaches is called Bag-of-Features which is studied in the thesis. In the Bag-of-Features approach, the images are described using a visual codebook. The codebook is built from the descriptions of the image patches using clustering. The images are described by matching descriptions of image patches with the visual codebook and computing the number of matches for each code.

In this thesis, unsupervised visual object categorisation using the Bag-of-Features approach is studied. The goal is to find groups of similar images, e.g., images that contain an object from the same category. The standard Bag-of-Features approach is improved by using spatial information and visual saliency. It was found that the performance of the visual object categorisation can be improved by using spatial information of local features to verify the matches. However, this process is computationally heavy, and thus, the number of images must be limited in the spatial matching, for example, by using the Bag-of-Features method as in this study. Different approaches for saliency detection are studied and a new method based on the Hessian-Affine local feature detector is proposed. The new method achieves comparable results with current state-of-the-art. The visual object categorisation performance was improved by using foreground segmentation based on saliency information, especially when the background could be considered as clutter.