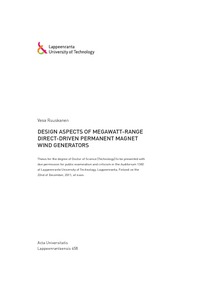 Direct-driven permanent magnet synchronous generator is one of the most promising topologies
for megawatt-range wind power applications. The rotational speed of the direct-driven
generator is very low compared with the traditional electrical machines. The low rotational
speed requires high torque to produce megawatt-range power. The special features of the
direct-driven generators caused by the low speed and high torque are discussed in this doctoral
thesis. Low speed and high torque set high demands on the torque quality. The cogging
torque and the load torque ripple must be as low as possible to prevent mechanical failures.
In this doctoral thesis, various methods to improve the torque quality are compared with
each other. The rotor surface shaping, magnet skew, magnet shaping, and the asymmetrical
placement of magnets and stator slots are studied not only by means of torque quality, but
also the effects on the electromagnetic performance and manufacturability of the machine are
discussed.
The heat transfer of the direct-driven generator must be designed to handle the copper losses
of the stator winding carrying high current density and to keep the temperature of the magnets
low enough. The cooling system of the direct-driven generator applying the doubly radial air
cooling with numerous radial cooling ducts was modeled with a lumped-parameter-based
thermal network. The performance of the cooling system was discussed during the steady
and transient states. The effect of the number and width of radial cooling ducts was explored.
The large number of radial cooling ducts drastically increases the impact of the stack end
area effects, because the stator stack consists of numerous substacks. The effects of the radial
cooling ducts on the effective axial length of the machine were studied by analyzing the crosssection
of the machine in the axial direction. The method to compensate the magnet end area
leakage was considered. The effect of the cooling ducts and the stack end area effects on the no-load voltages and inductances of the machine were explored by using numerical analysis
tools based on the three-dimensional finite element method.
The electrical efficiency of the permanent magnet machine with different control methods
was estimated analytically over the whole speed and torque range. The electrical efficiencies
achieved with the most common control methods were compared with each other. The
stator voltage increase caused by the armature reaction was analyzed. The effect of inductance
saturation as a function of load current was implemented to the analytical efficiency
calculation.