Growth, magnetic and transport properties of InSb and II-IV-As2 semiconductors doped with manganese 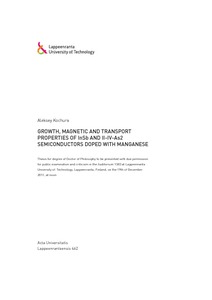 This thesis is devoted to growth and investigations of Mn-doped InSb and II-IV-As2
semiconductors, including Cd1-xZnxGeAs2:Mn, ZnSiAs2:Mn bulk crystals, ZnSiAs2:Mn/Si
heterostructures.
Bulk crystals were grown by direct melting of starting components followed by fast
cooling. Mn-doped ZnSiAs2/Si heterostructures were grown by vacuum-thermal deposition of
ZnAs2 and Mn layers on Si substrates followed by annealing. The compositional and structural
properties of samples were investigated by different methods. The samples consist of micro- and
nano- sizes clusters of an additional ferromagnetic Mn-X phases (X = Sb or As).
Influence of magnetic precipitations on magnetic and electrical properties of the
investigated materials was examined. With relatively high Mn concentration the main
contribution to magnetization of samples is by MnSb or MnAs clusters. These clusters are
responsible for high temperature behavior of magnetization and relatively high Curie
temperature: up to 350 K for Mn-doped II-IV-As2 and about 600 K for InMnSb. The low-field
magnetic properties of Mn-doped II-IV-As2 semiconductors and ZnSiAs2:Mn/Si heterostructures
are connected to the nanosize MnAs particles. Also influence of nanosized MnSb clusters on
low-field magnetic properties of InMnSb have been observed. The contribution of paramagnetic
phase to magnetization rises at low temperatures or in samples with low Mn concentration.
Source of this contribution is not only isolated Mn ions, but also small complexes, mainly
dimmers and trimmers formed by Mn ions, substituting cation positions in crystal lattice.
Resistivity, magnetoresistance and Hall resistivity properties in bulk Mn-doped II-IV-As2
and InSb crystals was analyzed. The interaction between delocalized holes and 3d shells of the
Mn ions together with giant Zeeman splitting near the cluster interface are respond for negative
magnetoresistance. Additionally to high temperature critical pointthe low-temperature
ferromagnetic transition was observed Anomalous Hall effect was observed in Mn doped
samples and analyzed for InMnSb. It was found that MnX clusters influence significantly on
magnetic scattering of carriers.