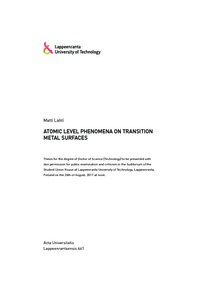 In this study we discuss the atomic level phenomena on transition metal surfaces. Transition metals are widely used as catalysts in industry. Therefore, reactions occuring on transition metal surfaces have large industrial intrest. This study addresses problems in very small size and time scales, which is an important part in the overall understanding of these phenomena. The publications of this study can be roughly divided into two categories: The adsorption of an O2 molecule to a surface, and surface structures of preadsorbed atoms. These two categories complement each other, because in the realistic case there are always some preadsorbed atoms at the catalytically active surfaces. However, all transition metals have an active d-band, and this study is also a study of the in uence of the active d-band on other atoms.

At the rst part of this study we discuss the adsorption and dissociation of an O2 molecule on a clean stepped palladium surface and a smooth palladium surface precovered with sulphur and oxygen atoms. We show how the reactivity of the surface against the oxygen molecule varies due to the geometry of the surface and preadsorbed atoms. We also show how the molecular orbitals of the oxygen molecule evolve when it approaches the di erent sites on the surface. In the second part we discuss the surface structures of transition metal surfaces. We study the structures that are intresting on account of the Rashba e ect and charge density waves. We also study the adsorption of suphur on a gold surface, and surface structures of it. In this study we use ab-initio based density functional theory methods to simulate the results. We also compare the results of our methods to the results obtained with the Low-Energy-Electron-Difraction method.