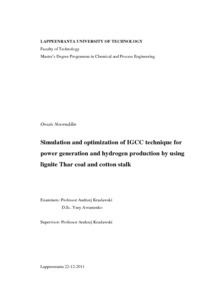 The purpose of this study was to simulate and to optimize integrated gasification for combine cycle (IGCC) for power generation and hydrogen (H2) production by using low grade Thar lignite coal and cotton stalk. Lignite coal is abundant of moisture and ash content, the idea of addition of cotton stalk is to increase the mass of combustible material per mass of feed use for the process, to reduce the consumption of coal and to increase the cotton stalk efficiently for IGCC process. Aspen plus software is used to simulate the process with different mass ratios of coal to cotton stalk and for optimization: process efficiencies, net power generation and H2 production etc. are considered while environmental hazard emissions are optimized to acceptance level.