Effects of Country of Origin on Consumer Product Evaluations: Finnish clothing products in the minds of Russian tourists 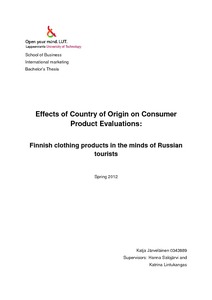 Companies operating in today’s highly internationalized markets consider product differentiation the key priority in pursue to attain a constant competitive advantage in challenging global environment (Baker and Ballington 2002, 158). The main driver affecting companies’ differentiation actions was described as early as 1912 by one of the marketing pioneers A. W. Shaw (1912, 710) as meeting human wants more accurate than the competition, and thus increasing customers’ perceived value and satisfaction. Dickson and Ginter (1987, 2) point out in their study based on earlier research by Chamberlin (1965) and Porter (1976) that differentiation can be based on either tangible characteristics of a product such as design or intangible characteristics such as a brand name and country of origin (hereafter referred to as COO).

The concept of COO and its impact on consumers’ evaluation of a product as an extrinsic product cue has been one of the most noteworthy topics in international marketing, having been voluminously examined by over 780 authors in more than 750 academic publications in the past 40 years (Papadopoulos and Heslop 2002, 294). Many of these studies accentuate the significant effect the COO has on consumers’ product attribute evaluations. People routinely associate country images with products and services in order to judge and categorize them based on perceived quality and risk levels; thereby COO can influence the likelihood of a purchase (Peterson and Jolibert 1995, 883-884; Verlegh and Steenkamp 1999, 523). Based on the vast research related to COO in the field of international business, it is widely recognized that the country associated with a product can act in a similar way as the name of a brand and even become a part of product’s total image. Thereby depending on customer’s values and perceptions, the product-country image can either increase or decrease perceived value.