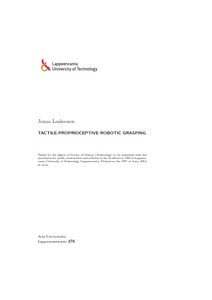 Robotic grasping has been studied increasingly for a few decades. While progress has
been made in this field, robotic hands are still nowhere near the capability of human
hands. However, in the past few years, the increase in computational power and the
availability of commercial tactile sensors have made it easier to develop techniques that
exploit the feedback from the hand itself, the sense of touch. The focus of this thesis lies
in the use of this sense.
The work described in this thesis focuses on robotic grasping from two different viewpoints:
robotic systems and data-driven grasping. The robotic systems viewpoint describes
a complete architecture for the act of grasping and, to a lesser extent, more
general manipulation. Two central claims that the architecture was designed for are
hardware independence and the use of sensors during grasping. These properties enables
the use of multiple different robotic platforms within the architecture.
Secondly, new data-driven methods are proposed that can be incorporated into the grasping
process. The first of these methods is a novel way of learning grasp stability from the
tactile and haptic feedback of the hand instead of analytically solving the stability from
a set of known contacts between the hand and the object. By learning from the data
directly, there is no need to know the properties of the hand, such as kinematics, enabling
the method to be utilized with complex hands. The second novel method, probabilistic
grasping, combines the fields of tactile exploration and grasp planning. By employing
well-known statistical methods and pre-existing knowledge of an object, object properties,
such as pose, can be inferred with related uncertainty. This uncertainty is utilized
by a grasp planning process which plans for stable grasps under the inferred uncertainty.