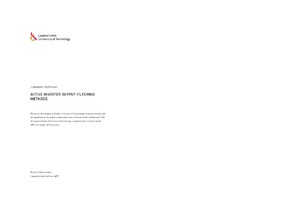 Frequency converters are widely used in the industry to enable better controllability and efficiency
of variable speed AC motor drives. Despite these advantages, certain challenges
concerning the inverter and motor interfacing have been present for decades. As insulated
gate bipolar transistors entered the market, the inverter output voltage transition rate significantly
increased compared with their predecessors. Inverters operate based on pulse width
modulation of the output voltage, and the steep voltage edge fed by the inverter produces
a motor terminal overvoltage. The overvoltage causes extra stress to the motor insulation,
which may lead to a prematuremotor failure. The overvoltage is not generated by the inverter
alone, but also by the sum effect of the motor cable length and the impedance mismatch between
the cable and the motor. Many solutions have been shown to limit the overvoltage, and
the mainstream products focus on passive filters.
This doctoral thesis studies an alternative methodology for motor overvoltage reduction. The
focus is on minimization of the passive filter dimensions, physical and electrical, or better
yet, on operation without any filter. This is achieved by additional inverter control and
modulation. The studied methods are implemented on different inverter topologies, varying
in nominal voltage and current.For two-level inverters, the studied method is termed active du/dt. It consists of a small
output LC filter, which is controlled by an independent modulator. The overvoltage is limited
by a reduced voltage transition rate. For multilevel inverters, an overvoltage mitigation
method operating without a passive filter, called edge modulation, is implemented. The
method uses the capability of the inverter to produce two switching operations in the same
direction to cancel the oscillating voltages of opposite phases. For parallel inverters, two
methods are studied. They are both intended for two-level inverters, but the first uses individual
motor cables from each inverter while the other topology applies output inductors. The
overvoltage is reduced by interleaving the switching operations to produce a similar oscillation
accumulation as with the edge modulation.
The implementation of these methods is discussed in detail, and the necessary modifications
to the control system of the inverter are presented. Each method is experimentally verified
by operating industrial frequency converters with the modified control. All the methods are
found feasible, and they provide sufficient overvoltage protection. The limitations and challenges
brought about by the methods are discussed.