Quasiclassical Approach to the Vortex State in Iron-based Superconductors 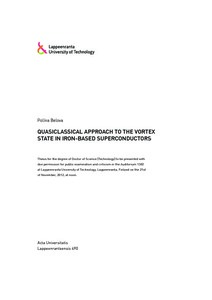 The quasiclassical approach was applied to the investigation of the vortex properties in the ironbased superconductors. The special attention was paid to manifestation of the nonlocal effects of the vortex core structure. The main results are as follows:
(i) The effects of the pairing symmetries (s+ and s₊₊) on the cutoff parameter of field distribution, ξh, in stoichiometric (like LiFeAs) and nonstoichiometric (like doped BaFe₂As₂) iron pnictides have been investigated using Eilenberger quasiclassical equations. Magnetic field, temperature and impurity scattering dependences of ξh have been calculated. Two opposite behavior have been discovered. The ξh /ξc2 ratio is less in s+ symmetry when intraband impurity scattering (Γ₀) is much larger than one and much larger than interband impurity scattering (Γπ), i.e. in nonstoichiometric iron pnictides. Opposite, the value ξh /ξc2 is higher in s+ case and the field dependent curve is shifted upward from the "clean" case (Γ₀ = Γπ = 0) for stoichiometric iron pnictides (Γ₀ = Γπ ≪ 1). (ii) Eilenberger approach to the cutoff parameter, ξh, of the field distribution in the mixed state of high 𝜅?-superconductors is developed. It is found that normalized value of ξh /ξc2 decreases both with temperature (due to Kramer-Pesch effect) and with impurity scattering rate Γ. The theory explains μSR experiments in some low-field superconductors and different ξh values from the Ginzburg- Landau theory predictions in isotropic s-wave superconductors. A comparison with another characteristic length ξ1, describing the gradient of the order parameter in the vortex center, is done. They have very different Γ-dependences: monotonous suppression of ξh (B) values and crossing behavior of the ξ1(B) curves at various Γ. This is explained by the nonlocal effects in the Eilenberger theory. (iii) The generalized London equation in the mixed state of high-𝜅? s-wave pairing superconductors with impurities is considered as a projection of the quasiclassical nonlocal nonlinear Eilenberger theory. Both nonlocal effects originated from extended states between the vortices and bound Andreev states in the vortex are taken into account. Comparison with different analytical nonlocal linear approaches (the Kogan-Gurevich, Amin-Franz-Affleck, Kogan-Zhelezina models) including only extended states is done. The influence of the impurities on the ratio of the cutoff parameter ξh and the Ginzburg-Landau coherence length ξc₂ is considered. Quasiparticle scattering by impurities and lowering of the temperature reduces the value of ξh to the values much less than ξc₂. This is different from the prediction of the local Ginzburg-Landau theory where ξh is scaled by ξc2. It is found that impurities influence by different way on the cutoff parameter ξh and the order parameter coherence length ξ1. The ξh decreases monotonously with the impurity scattering time in contrast to the nonmonotonous behavior of ξ1.