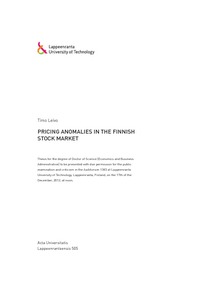 The aim of this thesis is to examine whether the pricing anomalies exists in the Finnish stock
markets by comparing the performance of quantile portfolios that are formed on the basis of either
individual valuation ratios, composite value measures or combined value and momentum indicators.
All the research papers included in the thesis show evidence of value anomalies in the Finnish stock
markets. In the first paper, the sample of stocks over the 1991-2006 period is divided into quintile
portfolios based on four individual valuation ratios (i.e., E/P, EBITDA/EV, B/P, and S/P) and three
hybrids of them (i.e. composite value measures). The results show the superiority of composite
value measures as selection criterion for value stocks, particularly when EBITDA/EV is employed
as earnings multiple. The main focus of the second paper is on the impact of the holding period
length on performance of value strategies. As an extension to the first paper, two more individual
ratios (i.e. CF/P and D/P) are included in the comparative analysis. The sample of stocks over 1993-
2008 period is divided into tercile portfolios based on six individual valuation ratios and three
hybrids of them. The use of either dividend yield criterion or one of three composite value measures
being examined results in best value portfolio performance according to all performance metrics
used. Parallel to the findings of many international studies, our results from performance
comparisons indicate that for the sample data employed, the yearly reformation of portfolios is not
necessarily optimal in order to maximally gain from the value premium. Instead, the value investor
may extend his holding period up to 5 years without any decrease in long-term portfolio
performance. The same holds also for the results of the third paper that examines the applicability of data envelopment analysis (DEA) method in discriminating the undervalued stocks from
overvalued ones.
The fourth paper examines the added value of combining price momentum with various value
strategies. Taking account of the price momentum improves the performance of value portfolios in
most cases. The performance improvement is greatest for value portfolios that are formed on the
basis of the 3-composite value measure which consists of D/P, B/P and EBITDA/EV ratios. The
risk-adjusted performance can be enhanced further by following 130/30 long-short strategy in
which the long position of value winner stocks is leveraged by 30 percentages while simultaneously
selling short glamour loser stocks by the same amount. Average return of the long-short position
proved to be more than double stock market average coupled with the volatility decrease.
The fifth paper offers a new approach to combine value and momentum indicators into a single
portfolio-formation criterion using different variants of DEA models. The results throughout the
1994-2010 sample period shows that the top-tercile portfolios outperform both the market portfolio
and the corresponding bottom-tercile portfolios. In addition, the middle-tercile portfolios also
outperform the comparable bottom-tercile portfolios when DEA models are used as a basis for stock
classification criteria. To my knowledge, such strong performance differences have not been
reported in earlier peer-reviewed studies that have employed the comparable quantile approach of
dividing stocks into portfolios. Consistently with the previous literature, the division of the full sample period into bullish and bearish periods reveals that the top-quantile DEA portfolios lose far
less of their value during the bearish conditions than do the corresponding bottom portfolios.
The sixth paper extends the sample period employed in the fourth paper by one year (i.e. 1993-
2009) covering also the first years of the recent financial crisis. It contributes to the fourth paper by
examining the impact of the stock market conditions on the main results. Consistently with the fifth
paper, value portfolios lose much less of their value during bearish conditions than do stocks on
average. The inclusion of a momentum criterion somewhat adds value to an investor during bullish
conditions, but this added value turns to negative during bearish conditions. During bear market
periods some of the value loser portfolios perform even better than their value winner counterparts.
Furthermore, the results show that the recent financial crisis has reduced the added value of using
combinations of momentum and value indicators as portfolio formation criteria. However, since the
stock markets have historically been bullish more often than bearish, the combination of the value and momentum criteria has paid off to the investor despite the fact that its added value during
bearish periods is negative, on an average.