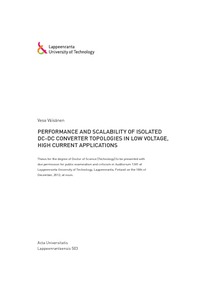 Fuel cells are a promising alternative for clean and efficient energy production. A fuel cell is
probably the most demanding of all distributed generation power sources. It resembles a solar
cell in many ways, but sets strict limits to current ripple, common mode voltages and load
variations. The typically low output voltage from the fuel cell stack needs to be boosted to a
higher voltage level for grid interfacing. Due to the high electrical efficiency of the fuel cell,
there is a need for high efficiency power converters, and in the case of low voltage, high current
and galvanic isolation, the implementation of such converters is not a trivial task.
This thesis presents galvanically isolated DC-DC converter topologies that have favorable
characteristics for fuel cell usage and reviews the topologies from the viewpoint of electrical
efficiency and cost efficiency. The focus is on evaluating the design issues when considering a
single converter module having large current stresses.
The dominating loss mechanism in low voltage, high current applications is conduction losses.
In the case of MOSFETs, the conduction losses can be efficiently reduced by paralleling, but in
the case of diodes, the effectiveness of paralleling depends strongly on the semiconductor
material, diode parameters and output configuration. The transformer winding losses can be a
major source of losses if the windings are not optimized according to the topology and the
operating conditions. Transformer prototyping can be expensive and time consuming, and thus
it is preferable to utilize various calculation methods during the design process in order to
evaluate the performance of the transformer. This thesis reviews calculation methods for solid
wire, litz wire and copper foil winding losses, and in order to evaluate the applicability of the
methods, the calculations are compared against measurements and FEM simulations. By
selecting a proper calculation method for each winding type, the winding losses can be
predicted quite accurately before actually constructing the transformer. The transformer leakage
inductance, the amount of which can also be calculated with reasonable accuracy, has a
significant impact on the semiconductor switching losses. Therefore, the leakage inductance
effects should also be taken into account when considering the overall efficiency of the
converter.
It is demonstrated in this thesis that although there are some distinctive differences in the loss
distributions between the converter topologies, the differences in the overall efficiency can
remain within a range of a few percentage points. However, the optimization effort required in
order to achieve the high efficiencies is quite different in each topology. In the presence of practical constraints such as manufacturing complexity or cost, the question of topology
selection can become crucial.