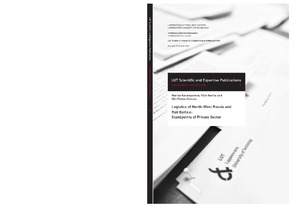 The main aims of the present report are to describe the current state of railway transport
in Russia, and to gather standpoints of Russian private transportation logistics sector
towards the development of new railway connection called Rail Baltica Growth Corridor,
connecting North-West Russia with Germany through the Baltic States and Poland.
North-West Russia plays important role not only in Russian logistics, but also wider
European markets as in container sea ports handling is approx. 2.5 mill. TEU p.a. and
handling volume in all terminals is above 190 million tons p.a.
The whole transportation logistics sector is shortly described as an operational
environment for railways – this is done through technical and economic angles.
Transportation development is always going in line with economics of the country, so the
analysis on economical development is also presented. Logistics integration of the
country is strongly influenced by its engagement in the international trade. Although, raw
material handling at sea ports and container transports (imports) are blossoming,
domestic transportation market is barely growing (in long-term perspective). Thus, recent
entrance of Russia into World Trade Organization (WTO) is analyzed theme in this
research, as the WTO is an important regulator of the foreign trade and enabler of volume
growth in foreign trade related transportation logistics. However, WTO membership can
influence negatively the development of Russia’s own industry and its volumes (these
have been uncompetitive in global markets for decades).
Data gathering in empirical part was accomplished by semi-structured case study
interviews among North-West Russian logistics sector actors (private). These were
conducted during years 2012-2013, and research compiles findings out of ten case
company interviews. Although, there was no sea port involved in the study, most of the
interviewed companies relied in European Logistics within significant parts in short sea
shipping and truck combined transportation chains (in Russian part also using railways).
As the results of the study, it could be concluded that Rail Baltica is seen as possible
transport corridor in most of the interviewed companies, if there is enough cargo
available. However, interviewees are a bit sceptical, because major and large-scale
infrastructural improvements are needed. Delivery time, frequency and price level are
three main factors influencing the attractiveness of Rail Baltica route. Price level is the
most important feature, but if RB can offer other advantages such as higher frequency,
shorter lead times or more developed set of value-added services, then some flexibility is
possible for the price level. Environmental issues are not the main criteria of today, but
are recognized and discussed among customers. Great uncertainty exists among
respondents e.g. on forthcoming sulphur oxide ban on Baltic Sea shipping (whether or not
it is going to be implemented in Russia). Rather surprisingly, transportation routes to
Eastern Europe and Mediterranean area are having higher value and price space than
those to Germany/Central Europe. Border crossing operations (traction monopoly at rails
and customs), gauge widths as well as unclear decision-making processes (in Russia), are
named as hindering factors. Performance standards for European connected logistics
among Russian logistics sector representatives are less demanding as compared to
neighbourhood countries belonging to EU.