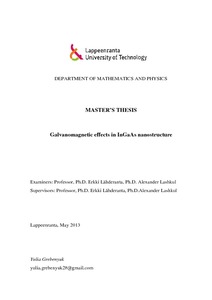 Investigation of galvanomagnetic effects in nanostructure GaAs/Mn/GaAs/In0.15Ga0.85As/ GaAs is presented. This nanostructure is classified as diluted magnetic semiconductor (DMS). Temperature dependence of transverse magnetoresistivity of the sample was studied. The anomalous Hall effect was detected and subtracted from the total Hall component. Special attention was paid to the measurements of Shubnikov-de Haas oscillations, which exists only in the case of magnetic field aligned perpendicularly to the plane of the sample. This confirms two-dimensional character of the hole energy spectrum in the quantum well. Such important characteristics as cyclotron mass, the Fermi energy and the Dingle temperature were calculated, using experimental data of Shubnikov-de Haas oscillations. The hole concentration and hole mobility in the quantum well also were estimated for the sample. At 4.2 K spin splitting of the maxima of transverse resistivity was observed and g-factor was calculated for that case. The values of the Dingle temperatures were obtained by two different approaches. From the comparison of these values it was concluded that the broadening of Landau levels in the investigated structure is mainly defined by the scattering of charge carriers on the defects of the crystal lattice