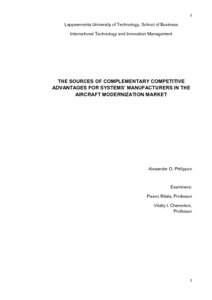 Being a top of high technology industries, the aerospace represents one of the most complex fields of study. While the competitiveness of aircraft systems’ manufacturers attracts a significant number of researchers, some of the issues remain to be a blank spot. One of those is the after-sale modernization. The master thesis investigates how this concept is related to the theory of competitive advantages. Finding the routes in the framework of complex technological systems’ lifecycle, the key drivers of the aircraft modernization market are revealed. The competitive positioning of players is defined through multiple case studies in a form of several in-depth interviews. The key result of the research is the conclusion that modernization should be considered as an inherent component of strategy of any aircraft systems’ manufacturer, while the master thesis aims to support managerial decision making.