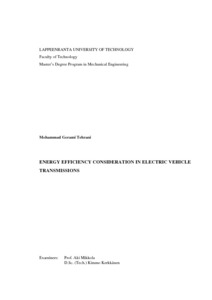 This study is a survey of benefits and drawbacks of embedding a variable gearbox instead of a single reduction gear in electric vehicle powertrain from efficiency point of view. Losses due to a pair of spur gears meshing with involute teeth are modeled on the base of Coulomb’s law and fluid mechanics. The model for a variable gearbox is fulfilled and further employed in a complete vehicle simulation. Simulation model run for a single reduction gear then the results are taken as benchmark for other types of commonly used transmissions. Comparing power consumption, which is obtained from simulation model, shows that the extra load imposed by variable transmission components will shade the benefits of efficient operation of electric motor. The other accomplishment of this study is a combination of modified formulas that led to a new methodology for power loss prediction in gear meshing which is compatible with modern design and manufacturing technology.