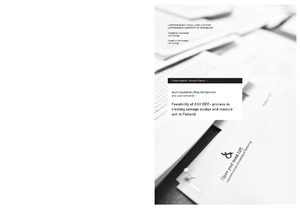 In Finland the thermal treatment of sewage sludge has been moderate in 21th century. The
reason has been the high moisture content of sludge. During 2005-2008, 97-99% of sewage
sludge was utilized in landscaping and agriculture. However agricultural use has been during
2005-2007 less than 3 %. The aim of national waste management plan is that by 2016 100%
of sludge is used either as soil amendment or energy. The most popular utilization method
for manure is spreading it on arable land. The dry manures such as poultry manure and horse
manure could also be used in incineration. The ashes could be used as fertilizers and while it
is not suitable as a starter fertilizer, it is suitable in maintaining P levels in the soil. One of
the main drivers for more efficient nutrient management is the eutrophication in lakes and
the Baltic See.
ASH DEC process can be used in concentrating phosphorus rich ashes while separating the
heavy metals that could be included. ASH DEC process uses thermochemical treatment to
produce renewable phosphate for fertilizer production. The process includes mixing of ashes
and chlorine donors and subsequent treatment in rotary kiln for 20 min in temperature of 900
– 1 050 oC. The heavy metals evaporate and P-rich product is obtained. The toxic substances
are retained in air pollution control system in form of mixed metal hydroxides.
The aim of conducting this study is to estimate the potential of ASH DEC process in treating
phosphorus rich ashes in Finland. The masses considered in are sewage sludge, dry manure
from horses, and poultry and liquid pig manure.
To date the usual treatment method for sewage sludge in Finland is composting or anaerobic
digestion. Part of the amount of produced sewage sludge (800 kt/a fresh mass and 160 kt/a
TS) could also be incinerated and the residual ashes used in ASH DEC process. Incinerating
only manure can be economically difficult to manage because the incineration of manure is
in Finland considered as waste incineration. Getting a permit for waste incineration is
difficult and also small scale waste incineration is too expensive. The manure could act as an
additional feedstock in counties with high density of animal husbandry where the land area
might not be enough for spreading of manure. Now when the manure acts as a
supplementary feedstock beside sludge, the ash can’t be used directly as fertilizer. Then it
could be used in ASH DEC process. The perquisite is that the manure producers could pay
for the incineration, which might prove problematic.