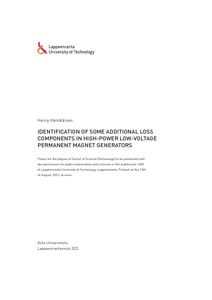 Permanent magnet generators (PMG) represent the cutting edge technology in modern wind
mills. The efficiency remains high (over 90%) at partial loads. To improve the machine
efficiency even further, every aspect of machine losses has to be analyzed. Additional losses
are often given as a certain percentage without providing any detailed information about the
actual calculation process; meanwhile, there are many design-dependent losses that have an
effect on the total amount of additional losses and that have to be taken into consideration.
Additional losses are most often eddy current losses in different parts of the machine. These
losses are usually difficult to calculate in the design process. In this doctoral thesis, some
additional losses are identified and modeled. Further, suggestions on how to minimize the
losses are given.
Iron losses can differ significantly between the measured no-load values and the loss values
under load. In addition, with embedded magnet rotors, the quadrature-axis armature reaction
adds losses to the stator iron by manipulating the harmonic content of the flux. It was,
therefore, re-evaluated that in salient pole machines, to minimize the losses and the loss
difference between the no-load and load operation, the flux density has to be kept below 1.5
T in the stator yoke, which is the traditional guideline for machine designers.
Eddy current losses may occur in the end-winding area and in the support structure of the
machine, that is, in the finger plate and the clamping ring. With construction steel, these
losses account for 0.08% of the input power of the machine. These losses can be reduced
almost to zero by using nonmagnetic stainless steel. In addition, the machine housing may be
subjected to eddy current losses if the flux density exceeds 1.5 T in the stator yoke.
Winding losses can rise rapidly when high frequencies and 10–15 mm high conductors are
used. In general, minimizing the winding losses is simple. For example, it can be done by dividing the conductor into transposed subconductors. However, this comes with the expense
of an increase in the DC resistance. In the doctoral thesis, a new method is presented to
minimize the winding losses by applying a litz wire with noninsulated strands. The
construction is the same as in a normal litz wire but the insulation between the subconductors
has been left out. The idea is that the connection is kept weak to prevent harmful eddy
currents from flowing. Moreover, the analytical solution for calculating the AC resistance
factor of the litz-wire is supplemented by including an end-winding resistance in the
analytical solution. A simple measurement device is developed to measure the AC resistance
in the windings. In the case of a litz-wire with originally noninsulated strands, vacuum
pressure impregnation (VPI) is used to insulate the subconductors. In one of the two cases
studied, the VPI affected the AC resistance factor, but in the other case, it did not have any
effect. However, more research is needed to determine the effect of the VPI on litz-wire with
noninsulated strands.
An empirical model is developed to calculate the AC resistance factor of a single-layer formwound
winding. The model includes the end-winding length and the number of strands and
turns. The end winding includes the circulating current (eddy currents that are traveling
through the whole winding between parallel strands) and the main current. The end-winding
length also affects the total AC resistance factor.