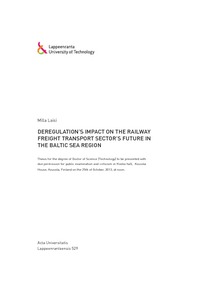 The European transport market has confronted several changes during the last decade. Due to
European Union legislative mandates, the railway freight market was deregulated in 2007.
The market followed the trend started by other transport modes as well as other previously
regulated industries such as banking, telecommunications and energy. Globally, the first
country to deregulate the railway freight market was the United States, with the introduction
of the Staggers Rail Act in 1980. Some European countries decided to follow suit already
before regulation was mandated; among the forerunners were the United Kingdom, Sweden
and Germany. The previous research has concentrated only on these countries, which has
provided an interesting research gap for this thesis. The Baltic Sea Region consists of
countries with different kinds of liberalization paths, including Sweden and Germany, which
have been on the frontline, whereas Lithuania and Finland have only one active railway
undertaking, the incumbent. The transport market of the European Union is facing further
challenges in the near future, due to the Sulphur Directive, oil dependency and the changing
structure of European rail networks. In order to improve the accessibility of this peripheral
area, further action is required.
This research focuses on topics such as the progression of deregulation, barriers to entry,
country-specific features, cooperation and internationalization. Based on the research results,
it can be stated that the Baltic Sea Region’s railway freight market is expected to change in
the future. Further private railway undertakings are anticipated, and these would change the
market structure. The realization of European Union’s plans to increase the improved rail
network to cover the Baltic States is strongly hoped for, and railway freight market
counterparts inside and among countries are starting to enhance their level of cooperation.
The Baltic Sea Region countries have several special national characteristics which influence
the market and should be taken into account when companies evaluate possible market entry
actions. According to thesis interviews, the Swedish market has a strong level of cooperation
in the form of an old-boy network, and is supported by a positive attitude of the incumbent
towards the private railway undertakings. This has facilitated the entry process of newcomers,
and currently the market has numerous operating railway undertakings. A contrary example was found from Poland, where the incumbent sent old rolling stock to the scrap yard rather
than sell it to private railway undertakings. The importance of personal relations is
highlighted in Russia, followed by the railway market’s strong political bond with politics.
Nonetheless, some barriers to entry are shared by the Baltic Sea Region, the main ones being
acquisition of rolling stock, bureaucracy and needed investments.
The railway freight market is internationalizing, which is perceived via several alliances as
well as the increased number of mergers and acquisitions. After deregulation, markets seem to
increase the number of railway undertakings at a rather fast pace, but with the passage of
time, the larger operators tend to acquire smaller ones. Therefore, it is expected that in a
decade’s time, the number of railway undertakings will start to decrease in the deregulation
pioneer countries, while the ones coming from behind might still experience an increase. The
Russian market is expected to be totally liberalized, and further alliances between the Russian
Railways and European railway undertakings are expected to occur. The Baltic Sea Region’s
railway freight market is anticipated to improve, and, based on the interviewees’ comments,
attract more cargoes from road to rail.