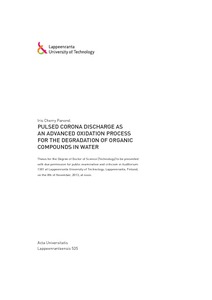 Advanced oxidation processes (AOPs) have been studied and developed to suffice the effective
removal of refractory and toxic compounds in polluted water. The quality and cost of wastewater
treatment need improvements, and electric discharge technology has a potential to make a
significant difference compared to other established AOPs based on energy efficiency. The
generation of active oxidant species such as ozone and hydroxyl radicals by high voltage discharge
is a relatively new technology for water treatment. Gas-phase pulsed corona discharge (PCD),
where a treated aqueous solution is dispersed between corona-producing electrodes free of the
dielectric barriers, was developed as an alternative approach to the problem. The short living
radicals and ozone formed in the gas phase and at the gas-liquid interface react with dissolved
impurities. PCD equipment has a relatively simple configuration, and with the reactor in an
enclosed compartment, it is insensitive towards gas humidity and does not need the gas transport.
In this thesis, PCD was used to study and evaluate the energy efficiency for degrading various
organic compounds, as well as the chemistry of the oxidation products formed. The experiments
investigate the aqueous oxidation of phenol, humic substances, pharmaceutical compounds
(paracetamol, ibuprofen, indomethacin, salicylic acids, -estradiol), as well as lignin degradation
and transformation to aldehydes. The study aims to establish the influence of initial concentration
of the target pollutant, the pulsed discharge parameters, gas phase composition and the pH on the
oxidation kinetics and the efficiency. Analytical methods to measure the concentrations of the
target compounds and their by-products include HPLC, spectrophotometry, TOC and capillary
electrophoresis.
The results of the research included in this summary are presented in the attached publications
and manuscripts accepted for publication. Pulsed corona discharge proved to be highly effective in
oxidizing each of the target compounds, surpassing the closest competitor, conventional ozonation. The increase in oxidation efficiencies for some compounds in oxygen media and at
lower pulse repetition frequencies shows a significant role of ozone. The role of the ·OH radicals
was established in the surface reactions. The main oxidation products, formation of nitrates, and
the lignin transformation were quantified.
A compound specific approach is suggested for optimization of the PCD parameters that have the
most significant impact on the oxidation energy efficiency because of the different characteristics
and responses of the target compound to the oxidants, as well as different admixtures that are
present in the wastewater. Further studies in the method’s safety (nitration and nitrosation of
organic compounds, nitrite and nitrate formation enhancement) are needed for promoting the
method.