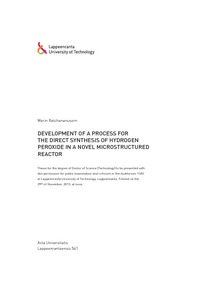 Microreactors have proven to be versatile tools for process intensification. Over recent
decades, they have increasingly been used for product and process development in chemical
industries. Enhanced heat and mass transfer in the reactors due to the extremely high surfacearea-
to-volume ratio and interfacial area allow chemical processes to be operated at extreme
conditions. Safety is improved by the small holdup volume of the reactors and effective
control of pressure and temperature.
Hydrogen peroxide is a powerful green oxidant that is used in a wide range of industries.
Reduction and auto-oxidation of anthraquinones is currently the main process for hydrogen
peroxide production. Direct synthesis is a green alternative and has potential for on-site
production. However, there are two limitations: safety concerns because of the explosive gas
mixture produced and low selectivity of the process.
The aim of this thesis was to develop a process for direct synthesis of hydrogen peroxide
utilizing microreactor technology. Experimental and numerical approaches were applied for
development of the microreactor.
Development of a novel microreactor was commenced by studying the hydrodynamics and
mass transfer in prototype microreactor plates. The prototypes were designed and fabricated
with the assistance of CFD modeling to optimize the shape and size of the microstructure.
Empirical correlations for the mass transfer coefficient were derived.
The pressure drop in micro T-mixers was investigated experimentally and numerically.
Correlations describing the friction factor for different flow regimes were developed and
predicted values were in good agreement with experimental results. Experimental studies were conducted to develop a highly active and selective catalyst with a
proper form for the microreactor. Pd catalysts supported on activated carbon cloths were
prepared by different treatments during the catalyst preparation. A variety of characterization
methods were used for catalyst investigation. The surface chemistry of the support and the
oxidation state of the metallic phase in the catalyst play important roles in catalyst activity
and selectivity for the direct synthesis.
The direct synthesis of hydrogen peroxide was investigated in a bench-scale continuous
process using the novel microreactor developed. The microreactor was fabricated based on
the hydrodynamic and mass transfer studies and provided a high interfacial area and high
mass transfer coefficient. The catalysts were prepared under optimum treatment conditions.
The direct synthesis was conducted at various conditions.
The thesis represents a step towards a commercially viable direct synthesis. The focus is on
the two main challenges: mitigating the safety problem by utilization of microprocess
technology and improving the selectivity by catalyst development.