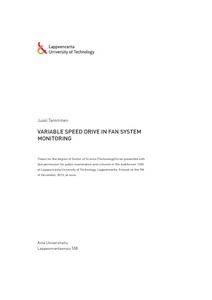 Fan systems are responsible for approximately 10% of the electricity consumption in
industrial and municipal sectors, and it has been found that there is energy-saving
potential in these systems. To this end, variable speed drives (VSDs) are used to
enhance the efficiency of fan systems. Usually, fan system operation is optimized based
on measurements of the system, but there are seldom readily installed meters in the
system that can be used for the purpose. Thus, sensorless methods are needed for the
optimization of fan system operation.
In this thesis, methods for the fan operating point estimation with a variable speed drive
are studied and discussed. These methods can be used for the energy efficient control of
the fan system without additional measurements. The operation of these methods is
validated by laboratory measurements and data from an industrial fan system.
In addition to their energy consumption, condition monitoring of fan systems is a key
issue as fans are an integral part of various production processes. Fan system condition
monitoring is usually carried out with vibration measurements, which again increase the
system complexity. However, variable speed drives can already be used for pumping
system condition monitoring. Therefore, it would add to the usability of a variablespeed-
driven fan system if the variable speed drive could be used as a condition
monitoring device.
In this thesis, sensorless detection methods for three lifetime-reducing phenomena are
suggested: these are detection of the fan contamination build-up, the correct rotational
direction, and the fan surge. The methods use the variable speed drive monitoring and
control options for the detection along with simple signal processing methods, such as
power spectrum density estimates. The methods have been validated by laboratory
measurements.
The key finding of this doctoral thesis is that a variable speed drive can be used on its
own as a monitoring and control device for the fan system energy efficiency, and it can
also be used in the detection of certain lifetime-reducing phenomena.