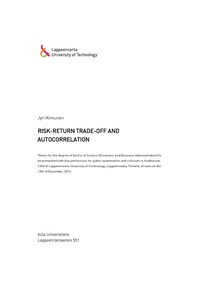 A trade-off between return and risk plays a central role in financial economics. The intertemporal
capital asset pricing model (ICAPM) proposed by Merton (1973) provides a neoclassical theory
for expected returns on risky assets. The model assumes that risk-averse investors (seeking to
maximize their expected utility of lifetime consumption) demand compensation for bearing
systematic market risk and the risk of unfavorable shifts in the investment opportunity set.
Although the ICAPM postulates a positive relation between the conditional expected market
return and its conditional variance, the empirical evidence on the sign of the risk-return trade-off
is conflicting. In contrast, autocorrelation in stock returns is one of the most consistent and robust
findings in empirical finance. While autocorrelation is often interpreted as a violation of market
efficiency, it can also reflect factors such as market microstructure or time-varying risk premia.
This doctoral thesis investigates a relation between the mixed risk-return trade-off results and
autocorrelation in stock returns. The results suggest that, in the case of the US stock market, the
relative contribution of the risk-return trade-off and autocorrelation in explaining the aggregate
return fluctuates with volatility. This effect is then shown to be even more pronounced in the case
of emerging stock markets. During high-volatility periods, expected returns can be described
using rational (intertemporal) investors acting to maximize their expected utility. During lowvolatility
periods, market-wide persistence in returns increases, leading to a failure of traditional
equilibrium-model descriptions for expected returns. Consistent with this finding, traditional
models yield conflicting evidence concerning the sign of the risk-return trade-off.
The changing relevance of the risk-return trade-off and autocorrelation can be explained by
heterogeneous agents or, more generally, by the inadequacy of the neoclassical view on asset
pricing with unboundedly rational investors and perfect market efficiency. In the latter case, the
empirical results imply that the neoclassical view is valid only under certain market conditions.
This offers an economic explanation as to why it has been so difficult to detect a positive tradeoff
between the conditional mean and variance of the aggregate stock return. The results highlight
the importance, especially in the case of emerging stock markets, of noting both the risk-return
trade-off and autocorrelation in applications that require estimates for expected returns.