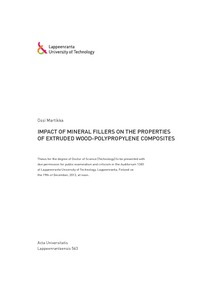 The main aim of this thesis is to study the effect of mineral fillers on the properties of extruded
wood-polypropylene composites (WPC). The studied minerals are Talc, Calcite (CaCO3), two
quantities of Wollastonite and Soapstone, and the level of mineral addition is 20 w-%. The
study shows that mineral fillers can be used to modify and improve the properties of woodplastic
composites. Especially the moisture-related properties of WPCs were found to be
improved significantly by mineral addition. As the WPCs of the studied type are commonly
used in outdoor applications, this is of importance in terms of usability. In machining, the
addition of two minerals retained the surface roughness at same level throughout the test,
indicating a favorable effect on machinability. The use of hard minerals shortened the tool life
in machining. In general, a modest increase in density was observed. In many of the studied
properties, no apparent influence of mineral addition was found, indicating that the properties
were not weakened. An overall result was that talc showed the best overall performance,
indicating that it can be used as an active filler improving most of the studied properties,
especially moisture resistance. Calcite was found to have nearly similar performance.
According to the findings, mineral addition to wood-plastic composites appears to be
beneficial; especially moisture resistance can be enhanced without diminishing the other
properties or usability in general.