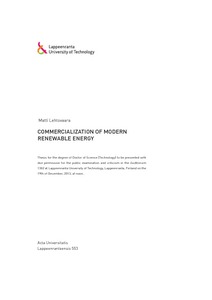 The threat of global warming and its consequences are widely recognized, and the question of how
to proceed with the long transition towards fossil fuel -neutral economies concerns many nations
and people. At the same time the world’s primary energy use is predicted to increase significantly
during the next decades as a result of global population and welfare increase. Improved energy
efficiency and increased use of renewable energy sources in the world’s energy mix play important
roles in the future energy production and consumption. The objective of this thesis is to study how
novel renewable energy technologies, such as distributed small-scale bio-fueled combined heat and
power production and wind power technologies could be commercialized efficiently.
A wide array of attributes may contribute to the diffusion of new products. In general, the bioenergy
and wind power technologies are in emerging phases, and the diffusion stage varies from
country to country. The effects of firms’ technology choices, collaboration and alliances are studied
in this thesis. Furthermore, the roles of national energy infrastructure and energy support schemes in
the commercialization of new renewable energy products are explored. The empirical data is based
on energy expert interviews, financial and patent data, and literature reviews of different case
studies. The thesis comprises two parts. The first part provides an overview of the study, and the second part
includes six research publications. The results reveal that small-scale bio-fueled combined heat and
power production and wind power technologies are still in emerging phases in their life cycles, and
energy support schemes are crucial in the market diffusion. The study contributes to earlier findings
in the literature and industry by confirming that adequate energy policies and energy infrastructure
are fundamental in the commercialization of novel renewable energy technologies. Firm-specific
issues, including business relationships and new business models, and market-related issues will
have a more significant role in the market penetration in the future, when the technologies mature
and become competitive without political support schemes.