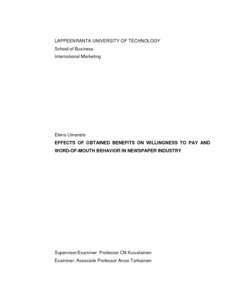 The purpose of this master’s thesis was to investigate the effects which benefits obtained from reading a newspaper and using its website have on behavioral outcomes such as word-of-mouth behavior and willingness to pay. Several other antecedents of willingness to pay have been used as the control variables. However, their interrelations haven’t been hypothesized.